Celebrating the individual with fine interior design.
Call Us Today!

Michael is the founder and major shareholder in TeamOne Global Incorporated where he serves as the president. He is a licensed Real Estate Broker and owner of Global Realty Group, C.A.R. Property Management Certified, Occupancy Specialist Certification (National Center for Housing Management), and winner of the 2011 award for Best Repositioned Property issued by The Apartment Association of California Southern Cities.

As a former Property Operations Manager at International Realty & Investments in Los Angeles from 2006 – 2017, Michael was selected as the assistant manager of the HOA Division from March 2006 until January of 2007. After being promoted to the Special Projects Division, a staffing transition allowed him to oversee management of a separate client portfolio in 2008. Michael accepted the position of Special Projects Operations Manager in June of 2010, where he created and submitted proposals for Los Angeles Housing Department RFP projects, managed all incoming Receivership and Conservatorship properties, and became project manager for the entire REO portfolio for the City of LA in 2010.

Michael took the position of maintenance staff supervisor in 2008, where he successfully coordinated and scheduled general maintenance for a large property portfolio that included Section 8 and Systematic Code Enforcement Program inspections, where 92% of all units passed initial inspections.

He assisted in the development of a REAP (Rent Escrow Account Program) Division in 2010, where he identified the necessity for a separate department to address volume of new business from owners with code violations and acceptance into REAP. As a result, dozens of client properties were brought up to code.

Michael re-developed company protocol on eviction cases for the Los Angeles Corporate Office and Long Beach Divisions by establishing a legal department. He provided training to all property portfolio managers on trial preparation including educating and instructing staff on creating case files, research and implementation of legal statues for witness testimony and settlement negotiation techniques.

Michael prevailed in securing full money judgments of more than $150,000 awarded by the Los Angeles County court system to clients by his former brokerage

In the more than 70 Unlawful Detainer cases where Michael appeared as an expert witness on behalf of clients represented by the firm, 95% of the judgments rendered were in favor of the landlord plaintiff he represented.

In 2011, Michael assisted in obtaining a 501(c) (3) non-profit designation for housing non-profit Urban Housing Solutions, Inc., where he served as an active board member and co-developer of the Tenant Household Management Training Program, which educated urban tenants on the importance sustaining permanent housing.

Michael  prepared a detailed educational program and proposals for submission to corporate sponsors for potential funding. His motto and brand name slogan is “Doing it the Right Way” because he believes fully in ethical integrity and fiduciary responsibility to any and all clients. 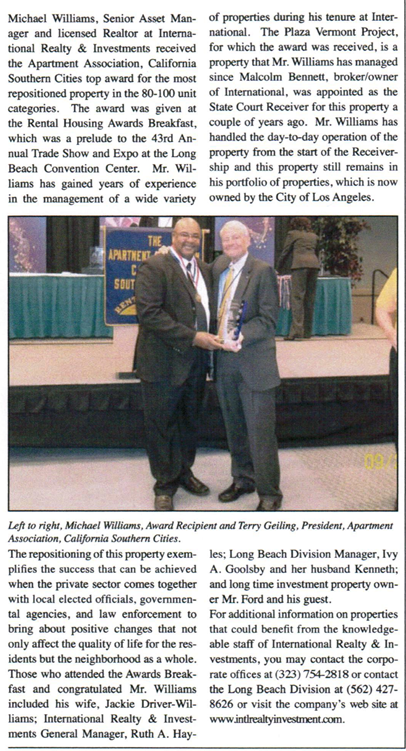 Some important case file summaries where Michael appeared as an expert witness.

Gang members/relatives of the lessee shot at police officers and attempted to hide the weapons at the property, which led to the subsequent UD filing and judgment for plaintiff on 12/6/17. Michael Williams appeared as lead witness and managing agent for plaintiff.

Tenant who resided in a property under RSO jurisdiction breached the rental agreement and violated the law by failing to allow landlord to make repairs required by SCEP. Owner filed a UD on a notice to quit. Michael Williams appeared as lead witness and managing agent for plaintiff in this jury trial case in Van Nuys where jury reached verdict in favor of Plaintiff.

Defenant previously agreed to Stipulation in Judgment and pay arrangements which they defaulted on. Michael Williams appeared as lead witness for Mr. Beard under Ex Parte application to enter judgment which was granted by Judge H Jay Ford III.

Former lessee filed a civil case against management company/manager and manager filed counter suit for past due rent which was awarded by Judge Michael J. Pearce for $4520.00

Scan This Code For Your Android Device

Scan This Code For Your Apple Device